The bikers wave, you’ve probably seen it, or even did it yourself. Here’s how it started.

The Background
The story is that William Harley and Arthur Davidson (Harley Davidson) were passing each other on the road back in 1904 and they waved to acknowledge one another. The “wave” was seen by passing motorists or pedestrians (I don’t know), and they told two friends, who told two friend, and so on and so on. Eventually, the story spread that bikers had a ‘wave’ between one another and all bikers started greeting each others in this way.

What Does The Wave Mean
The wave has several meanings. It’s as simple as ‘hey’, as profound as ‘ride with the wind’, ‘ride safely’, or something like ‘live long and prosper’… Ok, I made that up but if you’re a Trekki it could possibly mean that I suppose. The one thing that is certain is it’s used to say hello and that you’ve been seen and recognized as a fellow rider. It’s part of the riding etiquette. 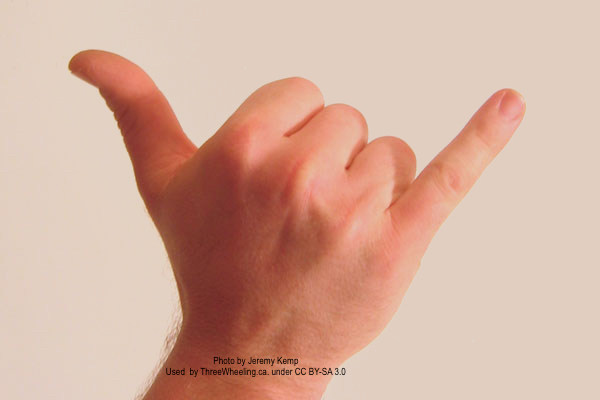 Variations of the peace sign are the 3 finger, the thumbs up, or the 2 finger shaka greeting of Hawaii or New Zealand which is also known as the ‘hang loose’. To do the shaka sign, you extend your arm (not fully) with thumb and baby fingers extended while the other fingers are closed. It’s held away from the body and not close like the similar “call me” hand sign. Shaka is also known as the surfer culture wave.

No Reciprocal Wave
If you don’t get a wave back, don’t get twisted over it or take it personally, there could be reasons why the wave wasn’t reciprocated.

Some of these reasons may be:
• Their hands were busy (shifting etc)
• They nodded instead
• They waved but you didn’t see it
• They did the raised peace sign on the handle bars
• They’re travelling with club brothers
• They didn’t see you
• You’re on a trike, 3-wheeler, auto-cycle
• They’re jerks and don’t want to wave back (it happens)²


Let’s Mention The Nod
If you decide to nod instead of wave, do it only once. The correct nod is a chin-and-ear tuck pulled down at an angle. You just pull your chin downwards in bowing type motion, that also tucks the ear towards the shoulder. Do it only once. I know I said it already but it’s one of those things that is important enough to say twice. Don’t do more than one chin-ear-tuck or you’ll look like a dork.


Be friendly, wave at all riders, enjoy the ride and never lose the joy of the open road.